The trapezius, commonly referred to as “the traps,” is a large muscle on the back, extending from the neck down to about mid back. Its shape resembles a trapezoid, hence the name trapezius. You know the muscle that the bar sits on when you are doing back squats? Yeah, that’s the one we’re talking about here. It happens to be one of the widest back muscles, and is the most superficial (nearest to the skin) of the back, neck, and upper trunk muscles.

The trapezius muscle is a postural and active movement muscle, and is used to tilt and turn the head and neck, shrug, steady the shoulders, and twist the arms. It has three functional parts: 1) an upper part which supports the weight of the arm. These fibers also elevate the scapula as in a shrugging motion. 2) a middle region which retracts the scapula, like during a scap push up. 3) a lower part which rotates the scapula inward and depresses the scapula, like during a scap pull up. 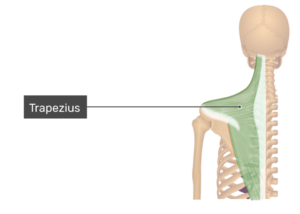 We use the traps for many of the exercises we perform in Crossfit, ranging from pressing overhead to pulling with the arms. Anyone crazy sore in their traps after a bunch of hang power cleans? If you have been, you know what I’m talking about. To target the traps, hit these movements, but also throw in any variation of pulls (clean or snatch), front raises with a plate, and some shrugs for good measure.