Oh the Lats. Probably one of my favorite muscles. My coach used to say that anybody can have abs or big arms, but if you have big lats, you’ve earned those. The latissimus dorsi is a large, flat muscle on the back that stretches to the sides, behind the arm, and is partly covered by the last month’s muscle, the traps, on the back. It is the largest muscle in the upper body, and quite literally means “broadest [muscle] of the back” if you are keeping up with your Latin.

Functionally, the latissimus dorsi muscle plays a huge role in scapular motion. Pretty much any movement that your shoulders can and do make is aided by the lats: extension, adduction, horizontal abduction, flexion from an extended position, and internal rotation of the shoulder joint. In layman’s terms, pressing and pulling in pretty much any position. It is also one of the main stabilizers of the spine during its various movements. 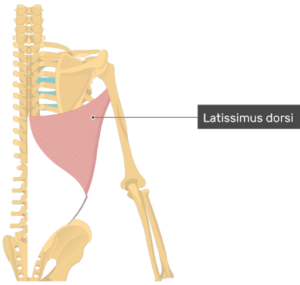 Interestingly enough, the lats are not used strenuously in common daily activities. However, it is an important muscle in many exercises such as pull-ups, chin-ups, lat pulldowns, and swimming (Crossfit). The lats are one of the main drivers of the kipping motion that we utilize in Crossfit, as well as a major player in pulling motions for movements like pull ups, rowing, and snatches. Pretty much anything we do in class will either directly or indirectly train the lats, but if you are looking to target them specifically, incorporate lat pull downs, strict pull ups, rows with barbells or DBs, and movements with a wider grip.

We fail at the margins of our experience (Monthly Mindset, March 2021) »